Where is Montalbano filmed?

Are you curious to discover where is Montalbano filmed? So, let’s find it out!

Mainly, the famous Andrea Camilleri series takes place in the uniques cities of Ragusa, Modica, and surroundings. First of all, we have Ragusa Ibla, a Baroque town, that is UNESCO heritage. Then, there is Sicli. Just like Ragusa Ibla, also Scicli’s old centre is part of the World Heritage Site of Val di Noto. So, those surroundings definitely worth a visit.

So, let’s find out together which ones are the best, the opening times, and the best tours to visit the Montalbano places.

Where is Montalbano filmed?

Mainly, the series takes place in the South of Sicily. First of all, you should know that Vigata is the fictional name of the city. However, it actually takes place in the Ragusa area. In particular, producers selected this area since it’s similar to the Camilleri’s hometown of Porto Empedocle, a few kilometres from Agrigento.

Now, if you’re a fan, and you have wondered where is Montalbano filmed, here you have a list of the best locations:

If you saw at least one episode of the series or the movies, you will remember the police station. Well, that’s where Montalbano spends most of the time. Actually, in the “Real World”, that is the beautiful town hall of Scicli. More specifically, it’s situated in the baroque street of Via Mormino Penna.

Then, during his investigations, Montalbano often meets his boss at the police headquarter. Despite, in the fiction, it is not clear how far is it, in real life the palace is just a few steps down the road, in Palazzo Iacono. So, when visiting, it’s easy to see both palaces.

Finally, Scicli worths a visit not just because is a place where is Montalbano filmed. Indeed, the old town centre is part of the World Heritage Site of the Val di Noto and, while less known than Ragusa, Noto and Modica, it is worth exploring.

Second, in our list, there is Punta Secca beach. Overall, the beach is in Marinella, a quiet fishing village with a pretty seaside. Today, the town hosts numerous tourists, especially on summer days.

Above all, the Montalbano house hosts a bed and breakfast, where you can stay for the night, or just have a coffee in the terrace. Also, it sits on a rocky beach where is Montalbano filmed during his romantic dates. So, you can take a walk to the beach, and live the same magical moments as the inspector.

But, note that in summer locals thronging the beaches. So, it can be crowded some days. Eventually, we would suggest visiting during spring or autumn days.

Subsequently, in the list of the places where is Montalbano filmed, there is another beach, Spiaggia Sampieri. After swimming in Punta Secca, Montalbano often uses to visit Donnalucata and Sampieri, two towns near Scicli.

Above all, the Spiaggia Sampieri is home of the Mannara, a ruined factory that becomes a tuna fishery in some episodes. Overall. both Sampieri and Punta Secca beaches are amongst the best of the South of Sicily. 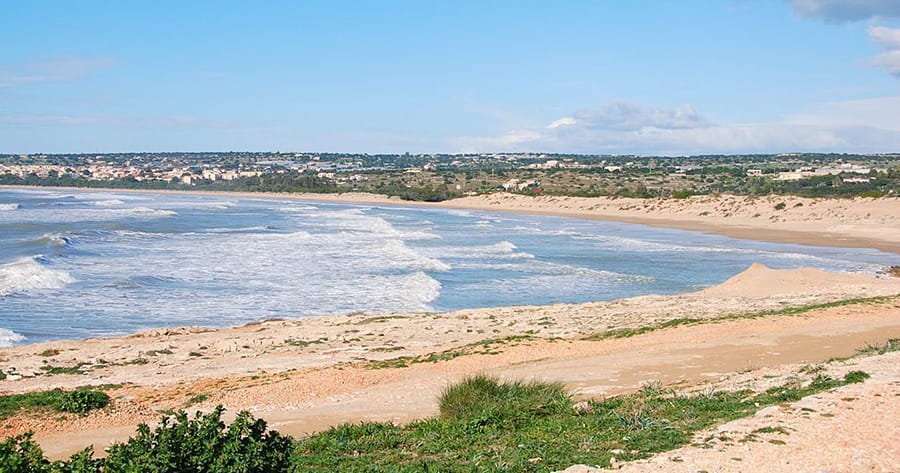 Next, Ragusa and Ragusa Ibla definitely deserves a visit. Here, the Inspector often eats at his favourite restaurant. Also, as we said before, many of the Vigata places are actually in Ragusa Ibla. Among those, the Piazza Duomo, with the Cathedral of San Giorgio.

Since Montalbano is famous also for his passion for good food, he’s a loyal customer of “Trattoria San Calogero”. Indeed, in real life, the restaurant is Trattoria La Rusticana, in Corso XXV Aprile. Today, you can book a table, and have lunch such as Montalbano does.

Further, the area also hosts the Church of Maria delle Scale, which lies between Ragusa and Ragusa Ibla. Unfortunately, in 1693, an earthquake destroyed part of the church. But, today you can still see the original Gothic-Catalan arches, in the right aisle. Ultimately, an important fact: you can only reach the church 242 steps. So, be careful with children or if you travel with people with limited mobility, as this way could be hard for them.

Fifth place on our list of the places where is Montalbano filmed, we find Modica. Mainly famous for its special chocolate, you will for sure remember the Ponte Guerreri viaduct. Above all, also the town is interesting for tourist purposes. Indeed, it has some lovely churches, that also features in some episodes.

Finally, if you love food as Montalbano does, visit the Antica Dolceria Bonajuto. 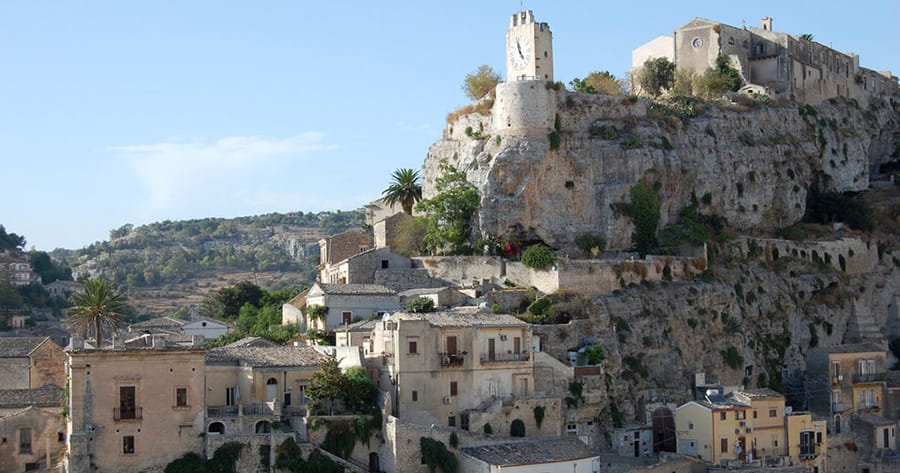 At least, we find The Castello di Donnafugata. In brief, this is the home of a Mafia boss, that Montalbano visits in some episodes.

Today, this beautiful castle belongs to Ragusa town council. Generally, tourists can visit it, and we would suggest a visit of a couple of hours.

Best Tours – Where is Montalbano filmed?

In conclusion, if you really want to live the Montalbano experience, you should take one of our daily tours. For Instance, in the Montalbano Tour, you will visit all the spots listed above.

Initially, one of our expert drivers will collect you from your favourite location in Sicily. Then, you will pass through the Eastern highway. Eventually, you will reach the Donnafugata Castle, Ragusa Ibla, and you will also enjoy a coffee in the Montalbano Terrace.

So, do not hesitate to contact us for any further information, or if you have specific questions.